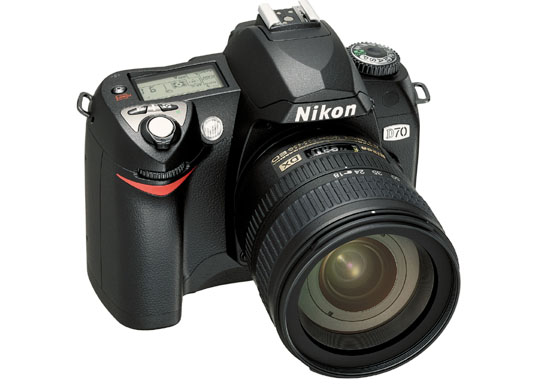 I decided I wanted to really understand how the camera worked, especially when it came to exposure and color, so I did a series of experiments documented on this page.

If you made a list of all the combinations of settings of the camera, you could think of each item in that list as being a particular variety of "virtual film" for your DSLR, and each would be suited for a different photographic task. You should choose your DLSR settings just like you would choose your film based on the scene you were photographing with a film camera, These experiments are attempts to characterize the different "virtual films" available on the D70.

[ You can also check out pictures I've taken with the camera here. ]

First, I wanted to find the exposure range of the camera. Books say things like "slide film has a very narrow exposure range while print film has a wider latitude, and digital is more like slide film." Well, what does that really mean?

For this experiment, I set up a gray card in front of the camera on a tripod so the card filled the frame. I put the camera in manual mode and adjusted the shutter speed and aperture until the meter indicated the exposure was correct. I took a series of pictures, varying the exposure in half-stop increments, and then analyzed them with the histogram tool in the GIMP.

My camera was set up as follows:

For the correctly exposed frame (in the table below, 0.0 exposure compensation), you might expect the peak of the histogram to be around 128 (halfway between zero and 255) since the meter is trying to make the subject "middle gray." As many others have noted, digital cameras (and the D70 in particular) shoot for a different "ideal exposure" than film cameras - they aim for 12% gray instead of 18%. Mostly, this is to reduce the likelihood of blowing out the highlights - easy to do with a digital camera. So, the histogram peak of the proper exposure is actually a little low, at 110.

The table below shows the approximate color, the effective exposure compensation, and the histogram peak for exposures from 4 stops under to 4 stops over in half-stop increments:

So at 3.0 stops above proper exposure, the frame is almost completely white, and the difference between 3 stops and 3.5 is minimal. Any detail in your subject exposed that way would be lost. Similarly, 3.0 underexposure yields a tone that's almost black, and anything below that is gone.

So I have my answer: there is between 5 and 6 stops of exposure latitude with the normal tone curve of the D70 - details within that range around the proper exposure will show up well in the photo.

Now, a lot of folks on the web weren't so happy with the camera underexposing middle grays just to save the highlights. They wanted a tone response more like film, so they created a custom curve for the D70. I'm not gonna rehash the whole story, especially since these folks did such a good job telling it themselves.

I downloaded the "Fotogenic +0.33EV Custom Curve v4.1" to my D70 and repeated the experiment. Notice that the proper exposure (0.0 compensation) now results in a histogram peak of 127 - right in the middle of the scale.

In the summer of 2007, I started seeing intermittent errors on the top LCD screen of the camera. Instead of displaying the number of pictures I could store on the CF card, it said CHA, and I couldn't take any photos. Usually, power cycling the camera a couple of times would fix the problem.

The manual says this is an error accessing card memory, so after a couple months of just dealing with it when the error occured, I bought a new card. First time in the camera, same problem.

A Nikon tech support rep suggested it might be dirty/corroded contacts in the compact flash card slot. This didn't seem that likely to me (the error happened when the card remained in the slot, not only when it was removed/replaced), but if I was gonna get anywhere with them, the contacts would have to be cleaned.

They suggested I send it off to Portland, OR (the closest authorized service center) for a couple of weeks to get cleaned, and that I pay about $150 for the privilege. Instead, I decided I'd do it myself. 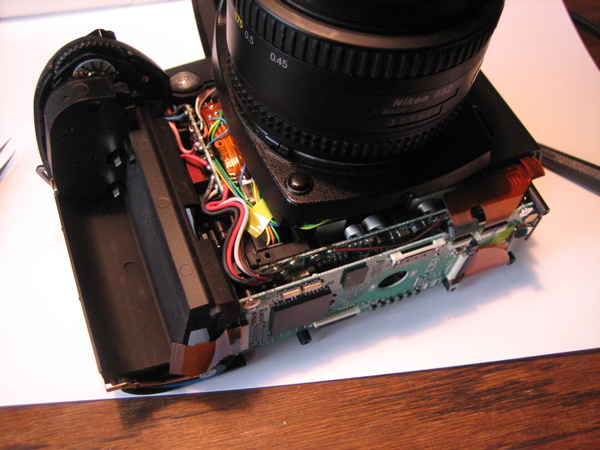 I found this page that documents disassembly of the camera up to a certain point (they're doing it to clean the sensor directly, quite a scary thing indeed). From there, it was a simple matter of disconnecting a flex cable and removing a couple of screws to get the whole CF daughter board assembly out of the camera. 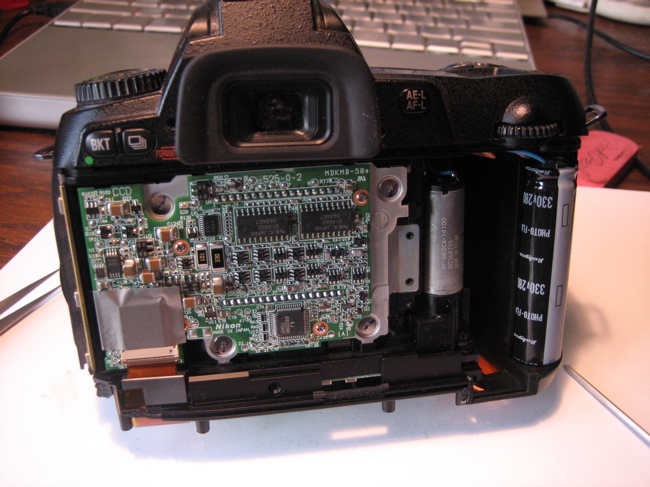 I took a bristled brush dipped in alcohol and cleaned the contacts. A buddy (thanks Brian!) suggested I also take a look at the flex cable - a great idea. Turns out one of the traces on the flex cable was starting to pull up and was probably intermittently shorting out to another pin. I excised what luckily turned out to be extraneous copper, reinstalled everything, and so far, it's working like a champ.

After four years of pretty consistent use, I finally accumulated enough dirt and grime on the sensor that just using an air-blower didn't get it clean. Loathe as I was to spend $50+ on supplies to clean the sensor, I wasn't left with much choice.

As per this article, I bought some swabs and sensor cleaning fluid, followed the instructions, and was left with a spotless sensor.